Interview to the President SALVO MIRABELLA (1958-2015) about how the passion and th idea of Mustang Club of Italy was born.

The key of our story is the passion, the pure and real passion for a car which after 50 years is almost known as the ” American myth”.

I am fascinated since when I was young, and I kept alive the desire of having one among years, and when i was 40 after the day in which I saw it on TV for the first time, I bought it, I felt the unique emotion that only a Mustang owner can understand.

Both of my sons : Filippo e Alessandro grew up wiith the passion for the Mustang,
Now they are fathers and i am grandpa, but the Mustang is always in our hearts and a part of our life.

We started attending some american cars meetings in 2004, and we introduced ourself as the Ford Mustang ones.

My first Mustang was white and unique: a real monster for that period: 750 hp with NOS plant, and a huge number of changes made over years. From the engine to the body, from the electronic to the chassis.

The world of Mustang enthusiasts fit like a glove to us but the car which for us is the most beautiful and famous of the world, In Italy didn’t have an association to represents and protect it.
We had to do something, both us and the passionates needed to gather under a unique flag which can represent us Nobody believes that a club Mustang branded  could be successful in Italy.
Anybody said it was so difficoult, on the contrary they said impossible, and everybody thought and suggested that a multi brand club could be better.

In 2006 me together with my sons founded the Club, actually we are one of the biggest and famous Mustang Club in the world. Our courage was awarded, and our passion recognized, it wasn’t easy at all, also because people at the beginning though that we were a nw commercial trick for selling cars or a fake web association.

We always try to do what we do in the best way we can, guarantteing a service to people who love Ford Mustang, giving space to all, collaborating with other Clubs, and we never without giving in to favoritism or gains.

Friends of all those who love to stay together and share the passion for Mustang, because are not only the cars that make the club, but also the people.
This is the reason why we call us Mustang Family.

The club aims to bring the fans know all disciplines so ‘over the years we have developed a team of drifting, drag racing, organized national and international tours and meetings .

It was amazing but we would like to do something new!

As well as lovers of Mustang, we are all sailing enthusiasts in the family so I decided to bring the world of sailing to the one of Mustang and in 2011 I decided to sponsor a friend of mine who lives in London and is a sailor, he partecipated to Global Ocean Race: Marco Nannini elected than as the Italian Sailor of the year.

Then with my partner Manuela ,who was infected from my passion created the women group of Mustang Women MCI Pink Power which represents the feminine side of the Mustang all over the world, we let it became international by creating and organizing meeting atat each stage of errival of the boat named:  MUSTANG BOAT.

We started to be known and we learned customs of Mustang Clubs of places far away from us as New Zealand and South Africa, capturing the interest of thousands offans Americans and Australians fans who saw the photos of our challenge against oceans by reading on the forums.

For nine months we focused day and night to support morally the sailor, to inform on the world racing Mustang forums, maintaining contacts with the organization of the race, with the Mustang Club and met with those of the successive stages.
We contacted the Italian embassies and consulates (become our fans with official statements) together with the local press to create an emotion to live of both on the ocean and at home on the web.

Thanks to that experince called challenge, we have close friendships with true Mustang Clubs on four continents strengthened with further meetings in later years as in South Carolina where the Myrtle Beach Club held a meeting in August of 2013 in our honor.

We literally brought the FORD and  MUSTANG CLUB OF ITALY logo around the world by let people riding the Mustang for the first time over all the oceans joining fans of four continents.

At every stage the  South Africa, New Zeland, Uruguay, South Carolina, and France Mustang Clubs supported us by attendig our International meetings by giving the welcome to Marco and to the MUSTANG BOAT of  Mustang Club of Italy along with Italian ambassadors and consuls who recognized the merit in our businesses to have exported with honor and seriousness the Figure of Italy abroad.

Here there are some of the highlights for the Club:

– The formalization of the Ford Mo.Co. as the only official club in Europe,
– The nomination as the first Regional Charter Club Mustang Club of America in Europe,
– In August 2011 and 2013, we wanted to know, in the circuit of Laguna Seca in California, the pilots of the legendary Ford Mustang that raced to the Trans Am in the 70s including Mr. Vic Edelbrook and Mr. Ray Thatcko of Summitt.
– On April 26, 2013, the MCI is one of four European clubs invited by FORD to the Milk Gallery in New York at the launch of the 2015 Mustang Auto Show to get the task to organize the celebrations of the 50th anniversary of the Mustang in Europe.
– On Aug. 3, 2013 we organized in collaboration with two Mustang Club of Florida event became famous for having scored a record attendance of Mustang joining for the first time in Florida all the major clubs representing both Mustang Shelby enough to have had an interview gone aired on Fox news Channel 4.
– On December 5, 2013, it is remembered as the day of the meeting between the big boss Mr. Bill Ford and Salvo and Philip Mirabella, we were invited by FORD in Barcelona for the introduction to the sale in the European market of new Mustang. This prestigious event was for me how to put a cherry on top of the cake of my passion made of years of commitment to getting the recognition for my work from the man who represents the mother house.
– During the weekend 03/04 May 2014 there was the celebration of the 50th anniversary of the Mustang in
Italy.
Saturday: meetings in 4 cities : Torino, Bolzano, Como e Modena from which started a  tour to arrive at the gala dinner in Verona.
Sunday meeting with the historic records of participation in Garda on the lake with more than 230 Mustang from Bulgaria, France, Germany, Switzerland, Austria and Italy.
– A website and two facebook pages with tens of thousands of visitation inform on the activities of the Club.
– Maybe the Club with the hugest number of twinnings, thanks to international meetings organized since the year of the race of the Global Ocean Race.

This is the history of the Mustang Club of Italy painted with broad strokes, difficult to summarize in a few lines, it would take a book to tell experiences, meetings and awards with an eye always turned to the future projects. 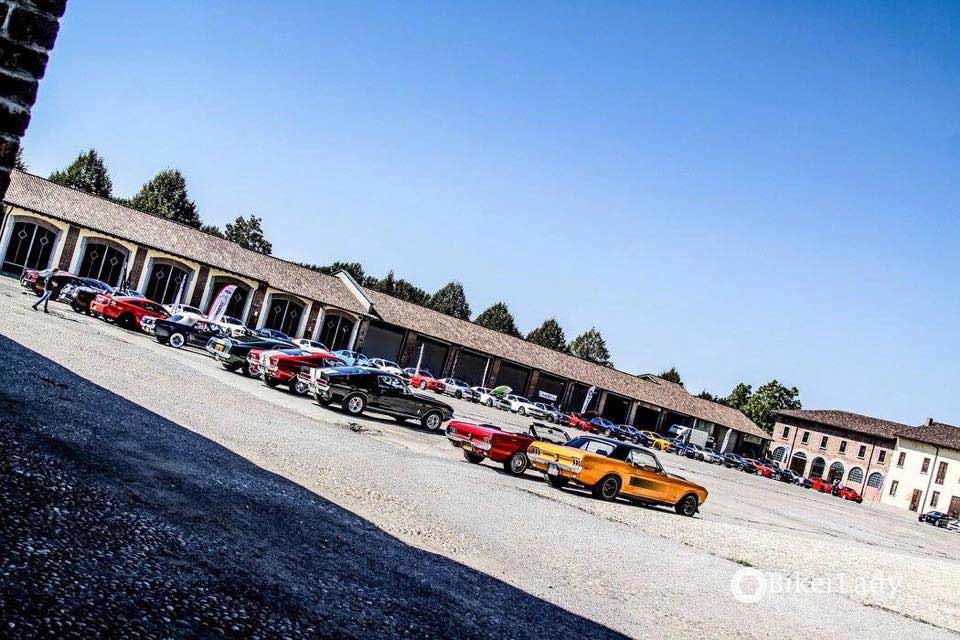