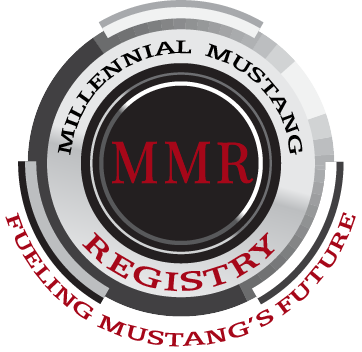 A project to bring the mustang legacy to the new generations.

There is a common misperception that Millennials don’t care about cars, but many of us know that this just isn’t true. The car show scene is dominated by older generations, and because of this, people think Millennials don’t love their Mustangs.  With the help of many supporters, including car clubs and individuals, The Millennial Mustang Registry (MMR) was created on March 7, 2018, to be a club for Millennials and by Millennials in order to show and share how much Millennials truly do love Mustangs as well as to try and get more people involved in the car world. It is a group of likeminded, similar-aged enthusiasts working together to build friendships and to ensure the future of Mustang.

To qualify for membership, individuals must own or have a Mustang and be born between the mid-1980s and the early 2000s. Membership is always free, and MMR currently has 255 members in 37 states, seven countries, and three continents! MMR has members in the United States, Italy, Canada, Sweden, France, Australia, and the United Kingdom. MMR has all body styles represented and includes cars that are currently in restoration as well as daily drivers and show cars.  MMR has active social media accounts on both Facebook and Instagram platforms as well as a website at www.millenialmustangregistry.com. While there are certain requirements to meet to become a member, the Facebook and Instagram pages are open to all.

In addition to participating in several shows in the United States, MMR has hosted three Garage Car Shows on Facebook.  These shows have combined had 66 entries and 6,145 total votes.  These garage shows have included international entries, and the winner of the January show was an MMR member in the United Kingdom.

John Clor, the Enthusiast Communications Manager at Ford Performance, has been instrumental in promoting the registry as has Gale Halderman (designer of the original Mustang) at the Halderman Museum in Tipp City, Ohio.  They help support MMR’s mission to “unite Millennials who have a passion for their Mustang, to make new acquaintances, and to share the joy that Mustangs bring to our lives.  MMR is working to ignite a flame within Millennials everywhere in order to fuel Mustang’s future.”

MMR has the support of National Parts Depot, Ford Performance, Eastbay Classics, Mustang America, and the Mustang Owners Club of Southeast Michigan (MOCSEM).  MMR is hoping to bring along other sponsors as it grows.  MMR is internationally known and has been featured in Mustang Times, Ford Muscle, Ford Performance Fast News, MustangForums.com, Ford NXT, and TorqueNews.com.

Bradley Belcher, President and MMR 001, is the founder of MMR and has enjoyed meeting new members and hearing their Mustang stories. Each member has expressed his/her love of the Mustang and his/her own car.  To many, the Mustang is not simply a car, but a personality.  Those who love Mustangs are members of the Ford Mustang family that includes all generations.  MMR is filling a need for those of the Millennial generation who want to share their Mustang love with others of a similar age and mindset, and what is proving to be so encouraging about the group is the widespread interest in all body styles and years of the Mustang.  MMR is indeed “Fueling Mustang’s future”.