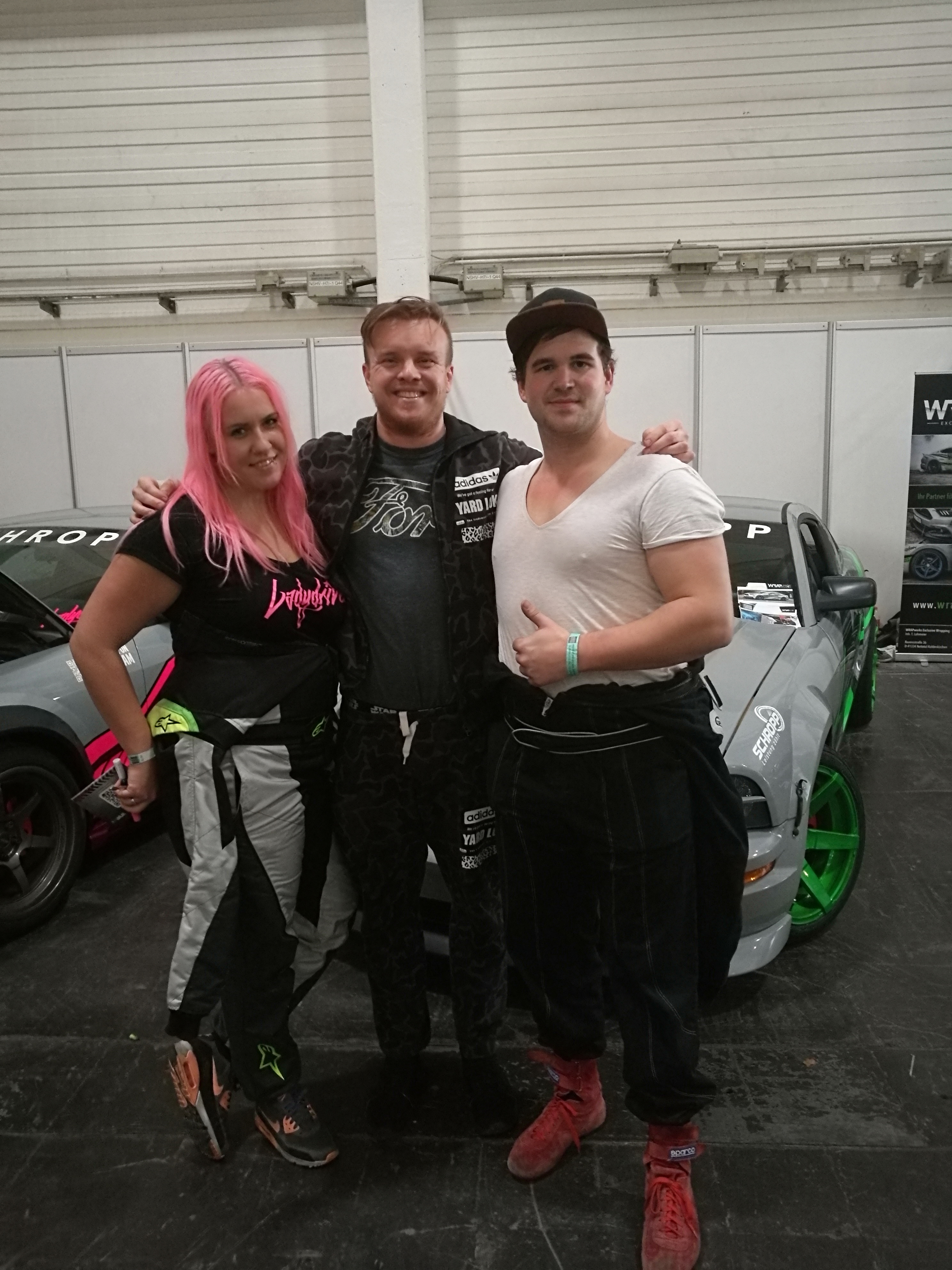 The Ford Mustang Love story between Romy and Michael

Like many Mustang enthusiasts, I spend a lot of time on websites like ebay, craiglists, etc.( also on their European Equivalents).

This summer, a friend of mine, that owns a roush sport, was looking for a set of bigger front brakes. Used ones, decent condition, possibly original Roush, 4 piston calipers. I Started the research, and after 3 weeks, i stepped in this roush calipers and rotors set, used, from Germany. I got in touch with this Girl , Romy Zavelberg, and i purchased the brakes. I cannot imagine which story there was behind this brakes.

I can’t ever Imagine that i will be able to be on the passenger seat of her drift car, with one of my best buddies seated in another drift Mustang, owned by her husband, Michael Zavelberg, at Essen auto show 2018.

But let’s proceed with order.

Romy and Michael grew up in two small cities in Germany.

Michael is an Electrical Engineer, and Romy is a Graphic designer.

Romy and Michael Met at a car show, just parking their mustang one beside the other.

“We met at a car event. He had his grabber orange Pony. And as the organizer of the meeting, he decided to park our ponys next to each other. we come into conversation. That’s how our love began.” Romy said.

MustangMania: “So who asked the other for a date?”

Micha: “it was a long process, but ended up well.”

Romy: “But I have to say, that he was the one that didn’t give up on contacting me –  I’ve been still in a relationship when we first met.”

“We didn’t really had a date until I broke up with my ex I think the first date we really had was on valentines day 2013.”

MustangMania: “ In which car you went out for your first date?”

Micha: “Both. We had a cruise togheter to the restaurant .”

Romy: “Yeah Both – we used to make ‘ride-outs’ with both cars, it was pretty cool to cruise along together”

MustangMania: “ When and why you bought your first Mustang?”

Micha: “In 2011. first it should be an Focus ST, i searched for about 2 month. One evening i searched for Mustangs, next day i went to see one, and i bought it. Man, this car infect you for life! “

MustangMania: “Do you have any pictures of your cars before The drift mods?”

MustangMania: “ Why you Chosed drifting?”

Romy: “Our passion for drifting started about 5 years ago. For me it was with friends that used japanese cars for drifting. That time I already had and loved my mustang. So I decided to learn drifting with the it. I talked to Florian Franz from Drift.de at the Essen Motorshow and together with Michael we started to train in Weilerswist with Driftfieber.de and also in Aldenhoven with Drift.de “

Micha: We both know that the mustang isn’t an easy driftcar. It’s to heavy, has nearly no angle and you have to modify sooo much! Much more than any other car. But we love the Mustang, the History and the whole feeling that comes with this cars. So we accepted the challange to make driftcars out of our “street mustangs”

MustangMania: “ How Many mustangs you had since your passion started?”

Romy: “ I always had only this  2007 V8 GT Supercharged Roush Edition that gradually became a driftcar. “Together we later started our “Driftlife” and in 2016 we moved from euskirchen to the eifel – near the nurburgring and 2018 well – we got married… 🙂 “

MustangMania: “ Do you Compete in any drift League?”

Micha: ” In the Nürburgring Drift Cub Club Class & Some other Side Events.”

Romy: “ In the Nürburgring Driftcup – but I more love to do Drift show and Drift taxi.”

After this interview, they jumped in their drift car, ready for their couple drift show at Essen Motor Show.

Stories of love and mustang were very common in USA, but extremely rare worldwide!

“We cross paths with certain people in our tangled lives for a reason. It’s not by chance, not an accident but it’s on a purpose. You were made to be part of someone’s life for it was written long before you were born.” Elizabeth E. Castillo