2019 was the year of the return of the Bullitt.

But let’s take a step back. What is Bullitt Mustang?

The car is named as the iconic 1968 film, starring the unforgettable Steve McQueen.

The film focuses on the figure of a police lieutenant, Frank Bullitt, who was able to solve a case in San Francisco in the early 70s.

The scene that consecrated this film to the history of cinema is the chase in the streets and hills around San Francisco of the Ford Mustang Highland Green, driven by Steve McQueen, and a 1968 Dodge Charger, black.

Needless to say, the Mustang has the Best.

Me and the Unicorn, the 1968 Bullitt Drove by Steve McQueen

Warner Bros. modified 2 Ford Mustangs for the Film: one for close-up filming, which was sold at the Mecum auction in Kissimee, Florida, in January 2020, for the staggering $ 3.74 million. Steve Mc Queen tried to buy it back many times, without success.

The second car , dedicated to stunts, found in the courtyard of a car wrecker in Mexico in 2017, and has been under restoration for a very long time.

Both cars were GT 390 S code, 4-speed manual gearbox, both modified by Max Balchowsky for cinematographic purposes, such as the connections frames for the cameras, roll bars,etc.

Steve Mc Queen himself did a lot of modification to the overall style of the car, painting in black the fuel tank cap, changing the suspensions, etc. 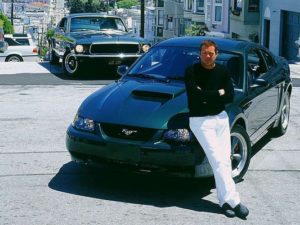 Chad McQueen and the 2001 Bullitt

They came equipped with 265 HP and was tighter and swifter than the standard GT. The torque came out to 305 and had a compression ratio of 9.4:1. they all had a 5-speed manual transmission with a final drive ratio of 3.27:1. Here are some key upgrades to the vehicle that ford made:

The formula worked so well that Ford reintroduced it in the two-year period 2008-2009, as an optional package that included a series of improvements to the GT model.
Total production was 6,582 units (4,975 Dark Highland Green, 1,607 Black, and 1 red, Bullitt’s pre-production test model)

The S197 version was much more closely resembled the exterior appearance of the original from 1968 and only came in Black and Highland Green colors. The prototype thas has been used to built this series was red, and has been founded( a saved from sad destiny) few years ago.S This model only came in a 5-speed manual transmission and came with 315 HP. This was a 15 HP increase from the standard GT. It also had a specific engine calibration which increased throttle response, could run on 87, 91, or even 93 octanes, and had a camshaft timing revision. Also returned exhaust was added for the signature Bullitt sound as well as the Redline limiter changed from 6250 RPM to 6500 RPMs. Below are some specifications for this 08’-09’ build:

In 2018, for the 50th anniversary of Bullitt Movie, Thanks also to the reappearance, in front of the general public, of the original Bullitt(owned from the same family since 1968), Ford decided to revive the idea of ​​this model, for another two years.
For the first time in the history of this special model, 700 units were built RHD in 2019 for the Australian market, 400 for the UK, 1000 LHD for the Europe market (500 Germany, 82 in France, 68 in Italy, 30 in Poland , 18 in Denmark, 10 in the Czech Republic..).
Our pre-pandemic estimate is that production over the two-year period(2019-2020) would have been even higher than that of 2008-2009. To date we have no information on the exact number from Fo.Mo.Co.

Let’s talk about the car now.
On the American website, the color options available in addition to the 2 colors, SHadow Black and Dark Highland Green, mainly involve infotainment (3 options for audio system and touch screen radio), suspensions (for my 2020 the Magnarides have become optional ), and the seats, air conditioned and heated for the tranqulli drivers, recaro for the more sporty.
The solfa changes on the European site,
Where Germany (European reference market) has the 2 color variants, the 2 seat options, the Magnaride and the Thatcham Alarm.
Where for Italy the only option that can be added is the Thatcham Alarm: five radar sensors are integrated in the car which constantly inform about what surrounds the car.

The car has a number of modifications “inherited” from the American older sister, the Shelby GT350:

And some dedicated Mods:

Bullitt represents the top of the range for Ford Mustangs officially imported into Europe by Ford: with 459 HP and 529 Nm of torque, against the 450 HP of the normal GT.
The difference is more substantial in the more “performing” American sisters, where the Bullit boasts 486 hp and 569 Nm, against the 466 of the GT version: a good 20 hp difference.
Why so much detachment from overseas versions, will you ask?
The answers are 2, and they are simple: Emissions and Automotive Taxes.
The versions for Europe (more generally for exports) have been “adapted” to the needs of local markets.
Another example is the domes bar, not present on the Export versions of the Bullitt, but sold separately via parallel import.

Let’s talk about performance:
the 0-100 is covered in just 4.3 seconds, not bad for an 18 quintal car!
Consumption stands at around 8km / lt on the mixed route.
The maximum declared speed is 263 km / h.
With such a roar, worsening consumption is really a moment … 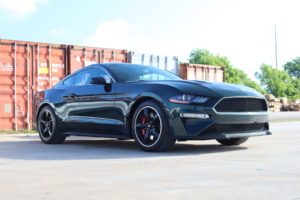